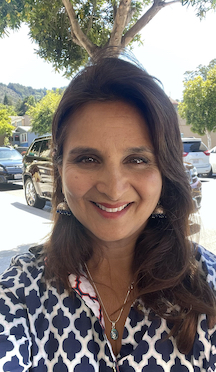 Anjali Sawhney (she/her/s) is a Certified Integral Life Coach from New Ventures West in San
Francisco, 2006 and a trained international Leadership Embodiment Teacher (somatic coaching
based on Aikido & Mindfulness) with founder Wendy Palmer, 2011. Anjali has coached & led
somatics & mindfulness workshops in the movement, non-profit, corporate, and educational
sectors including at the East Bay Meditation Center (where she is also part of the Leadership
Sangha Board) as well as the Richmond Community Foundation, California Endowment, Dream
Corps, & UCSF. She is also on the facilitation teaching team at Strozzi Institute (Generative
Somatics lineage) & Beloved Communities. Anjali also serves directly with untapped BIPOC &
LGBTQI+ students, those unhoused, and those in recovery by providing coaching, counseling &
series workshops.
Anjali was born in Asia, raised in Los Angeles, and has lived on the east coast of the United
States as well as in South & East Asia. She is passionate about rallying untapped folx through
coaching, community & spirituality as well as street protests for equity & systemic change. Anjali
is in awe of nature & live music, & on rare occasions is allowed to groove with her teenagers,
Aanika and Jai.